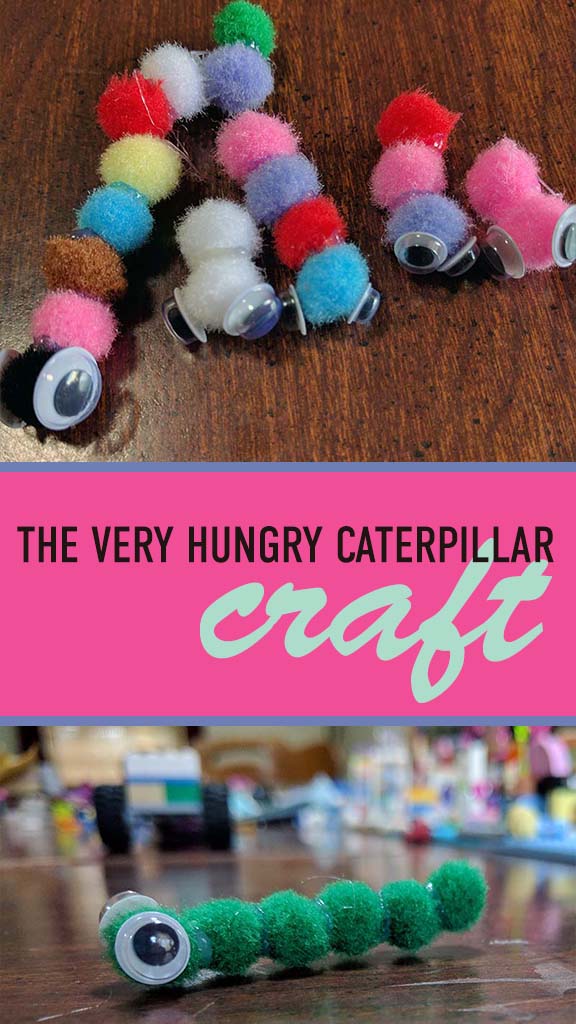 The Very Hungry Caterpillar by Eric Carle is a well loved favorite in my house. Even my 8yr old still loves it!

So, naturally, when I told the kids we were going to do a fun caterpillar craft, we had to read the book, about a doze time, before we could get started crafting.

We had so much fun making these cute little caterpillars. My girls even made some to take and share with friends, because, honestly, they’re so cute!

These little caterpillars are also fast, and easy to make. For your littles, just have them line up their little pompoms in the order they want them and you do the gluing. My 8yr old was thrilled with the prospect of using the hot glue gun so she insisted on making her own. 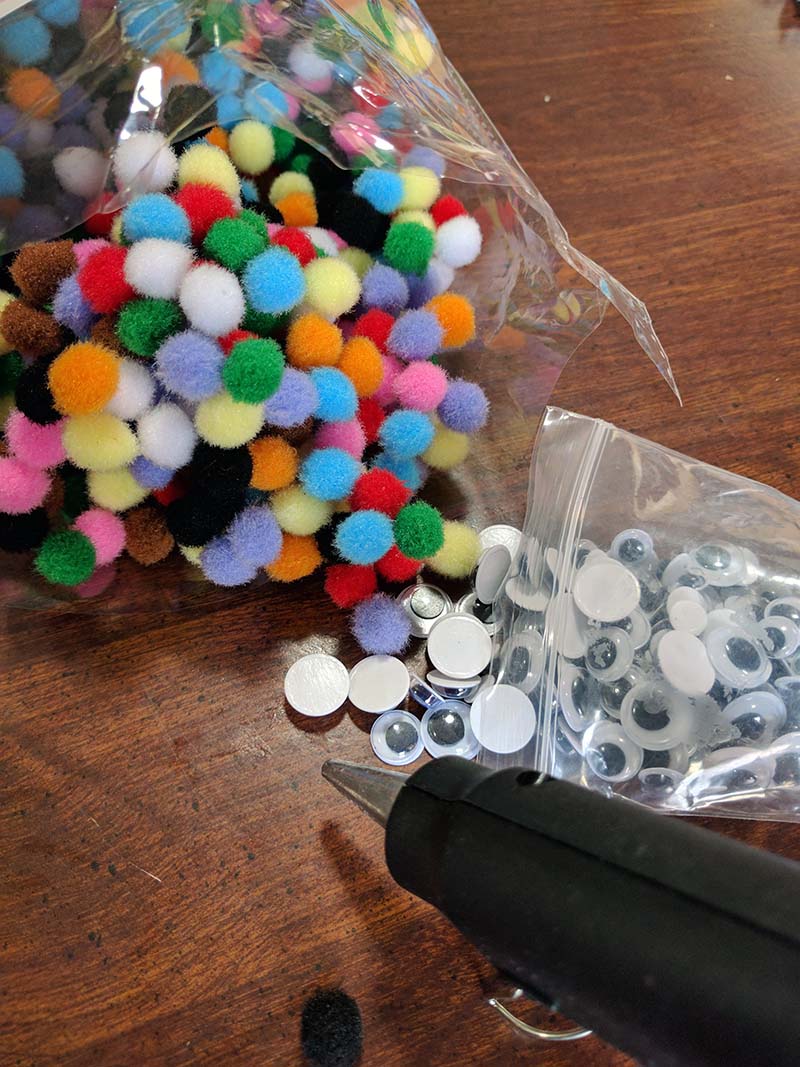 Sounds easy so far! Now, just line up however many pomPoms you want, in whatever color order you want and hot glue them together. After the glue has dried (which is super fast in case your toddler is wondering) you can hot glue gun or stick on the eyes. I prefer the glue because they stick better. 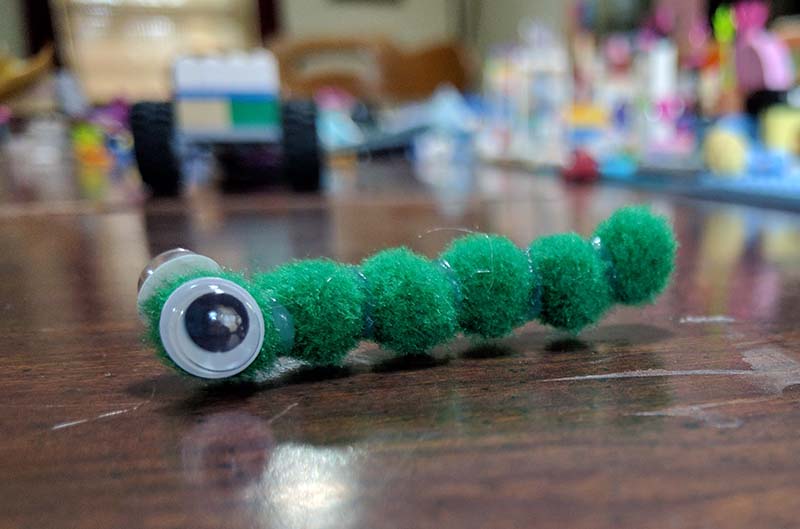 1. Styrofoam – Guess what I just attempted to clean off the entryway steps? Yup, styrofoam, otherwise known as “static cling white snow”. It sticks to the broom, it flies up and sticks to my socks, and then it floats down to a few steps below just taunting me as I work my way down the stairs with the broom.

How did it get here? Well…the other day I was assembling a new shelf. And, like all packages, it came packed with styrofoam. Nice, long pieces of styrofoam, perfect for swords. Well, I felt that the kids would be better off playing outside (since the weather was beautiful) than they would be inside, on the couch, playing the iPad – it should be noted that this decision was a good parenting decision, I am getting my kids active. So, I suggested that they take the styrofoam outside and have a sword fight. Like children often do, they eagerly took all the styrofoam, only, they didn’t take it outside. They first had a sword fight in the kitchen, up and down the stairs, through the basement, and finally outside. I’ll be cleaning up styrofoam for weeks.

2. Glitter – I really could just say here that “I should have known better” and you would agree. No explanation needed. The other day at Hobby Lobby, the girls found a big bottle of glitter that was on sale. They love anything that sparkles so I got them some glitter. After we got home, I showed them how to put glue down on some paper and sprinkle a little glitter on. Of course, within minutes they had dumped out the ENTIRE bottle of glitter. Not wanting things to go to waste, I actually put most of the loose glitter back in the bottle for later. The next week, they did it again. This time, I threw it all away. I’ll still be cleaning up glitter for a month!

Not to forget the Christmas decorations that shed glitter everywhere. You’d think I’d learn and just throw them away! But, nothing beats glitter on everything for a month, right?

3. Pom Poms – you know, those things with the long strings that shed off when the kids breathe – or shake them or pull them off to use as confetti. I’ve been digging those plastic pom pom strings out of the wash for WEEKS! They’ve also managed to wind themselves around every vacuum I own and there is still somehow a hidden supply that produces a few new pieces every day. Who thought these were a good idea for children?

And after FINALLY getting all the pieces out of my house, someone gave my children 4 more for Christmas. I must think up a truly awful gift to give their child next year. Maybe a styrofoam house, or something with lots and lots of glitter!

4. Play-dough – so I usually have good success with this stuff but the last time the kids had it out it ended up everywhere! Probably because the baby felt that since it wasn’t good for eating, he should throw it. Fortunately, once it dries, it’s easy to sweep up and throw away. We’re just almost out of play-dough. Horray! And when we run out, I’ll probably buy more even though I know better!

5. Legos – I love the little things and I hate the little things. They’re constantly on the floor like little spikes for my feet. It doesn’t seem to matter how many of them I pick up, there’s always one more down there! I like that the girls enjoy building, but then baby boy comes along like Godzilla and smashes them all. I’m looking forward to the day when he wants to build instead of destroy!

It doesn’t help that we have my husband’s lego collection from when he was a kid, so there’s this endless supply of “new” kits to build. And don’t forget the giant tub of random pieces that I picked up at a yard sale last year. To top it off, I’m seriously considering creating a lego room for my son when he’s a little older. I probably should know better, but what would be the fun in that?