So, I went to my daughter’s friend’s 6th Birthday party the other day and I find myself puzzled as to why we as parents continually put ourselves through this. Not that I hate birthday parties, but they all seem to operate the same way, and I can’t figure out why we all do it this way. I’ve been to over a dozen such birthday parties – children’s museum, bounce houses, pool party, splash pad, princess party, gym party, pizza party, and I’m sure a few more I can’t remember at the moment.

They all go the same way, a group of parents (usually just the moms and a few dads), most of whom do not know each other, all arrive at the designated party location. Every child present at the party knows the birthday child and usually knows a few of the other children so there’s a general mobbing/following of the birthday child as she plays because every child wants to play with her and they don’t know most of the other children.

The parents stand (or sit, if there happen to be seats) at the edges of the room and watch the kids play, if you’re lucky, you know one of the parents (other than the birthday child’s parents) at the party and you have someone to talk to, but over half of the room doesn’t know any one else at the party so you say hi to the person you happen to be standing next to, carry on a short awkward conversation about where your kid goes to school (I homeschool so my conversation usually ends with the other parent saying something about having a cousin or other distant relative that homeschools). Then you wait for an hour to an hour and a half while the kids play.

After playing the kids enter the party room and are served cake, icecream, and juiceboxes. Sometimes they even get pizza, chicken nuggets, or other snacks. Really nice hosts have over prepared and have enough food for the parents as well (which only half of the parents will eat because you feel awkward eating at a kids party). But, at most parties, the parents just sit (or stand) and watch as their kids eat.

Next, the birthday child opens presents – which are generally all toys, with lots of admonitions from parents telling their kids to back up and give the birthday child space. Your child receives a goody bag (full of candy and other small objects that will soon be lost or destroyed) and you go home.

Now, what I can’t figure out is why we do this to ourselves multiple times a year. First of all, why do we all stand by bored as can be and watch our kids play for over an hour? You’d think someone would have something for the parents to do. Second, why is there never any food for the parents – we’ve been there just as long as the kids and I’m always hungry come cake time. Usually if the host family provides the food there is food for the parents but if the food is catered by the party place then there is only food for the kids, you’d think they would provide something for the parents as well.  Third, why do we always purchase toys for other children – I dread all the toys my children receive on their birthdays, I never have room to fit them all, and yet I always buy toys (and so does everyone else).

Don’t get me wrong, I love a good party, but it just seems like there must be a better way to do kids parties instead of putting ourselves through this over and over.

For my Birthday I made my own cake. Now, before you say you’re sorry I had to make my own cake, you have to know, it was between making my own cake and letting my husband make my cake. I’ve never seen him bake so I probably would not get a cake in the end and it would be much more work for me to walk him through the cake making process. 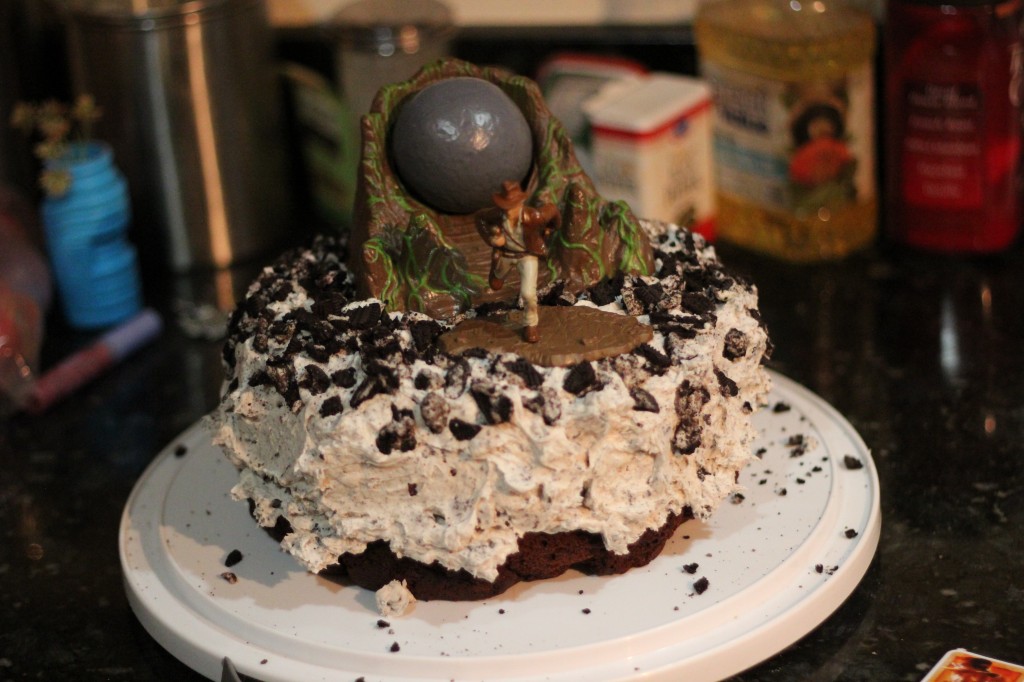 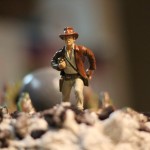 It was a delicious cake with a fun topper. I love Indiana Jones!

And, I had fun taking pictures of my cake…

I got the recipe from a blog called My Baking Addiction. It was delicious! The icing really tasted just like the oreo filling and what’s not to like about an entire box of oreos on the cake!

For the Oreo Buttercream

1. Preheat oven to 350 degrees F. Line the bottoms of (2) 9 inch round cake pans with parchment and grease pans thoroughly.

2. In a large bowl, mix together the cake and pudding mix, salt vanilla, sour cream, oil, beaten eggs and water. Stir in the chocolate chips and divide batter into the prepared pans.

3. Bake for 25-35 minutes, rotating pans half way through baking the baking time. Bake until the top is springy to the touch and a wooden toothpick inserted comes out clean. Cool cake for at least 30 minutes before inverting. Allow cake to cool completely on wire rack.

For the Oreo Buttercream

1. Cream the butters in the bowl of an electric or stand mixer. Add the vanilla extract and combine well. 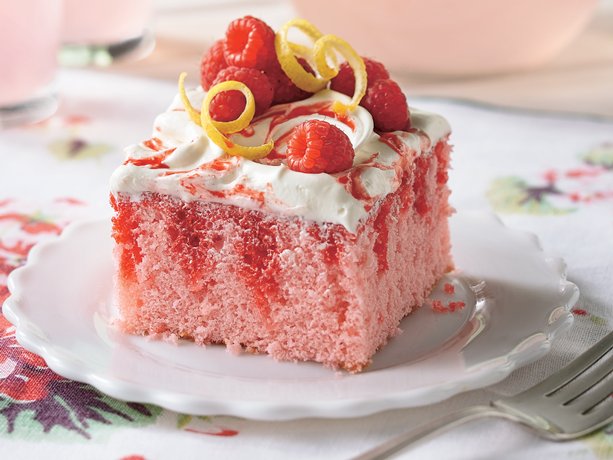 I got this recipe off the Betty Crocker website. I made it for my 3 year old’s birthday this past summer and everyone loved it! The cake does get a tad soggy if it sits overnight so this is something you will want to make the morning of the party and not the night before.
Raspberry Lemonade Cake
1 cup very hot water
1 box (4-serving size) raspberry-flavored gelatin
1 box Betty Crocker® SuperMoist® white cake mix
1/2 cup frozen (thawed) lemonade concentrate
1/4 cup water
1/3 cup vegetable oil
4 egg whites
1 container Betty Crocker® Whipped vanilla frosting
1 cup frozen (thawed) whipped topping
1 1/2 cups fresh raspberries, if desired
Lemon peel strips, if desired
Makes 12 servings

I tried out this cake recipe yesterday. Unfortunately, I sent it to work with my husband before I got a picture. However, it was delicious, easy to make, and contained all ingredients that I keep on hand so I’m going to post it without a picture.

I got this recipe out of this month’s Everyday Food magazine. This is my favorite cooking magazine. Most of the recipes contain ingredients that I can identify and the recipes are not too time-consuming to make. A must with little kids!

This recipe did use a large number of bowls, which my kids appreciated since they got to lick out every one of them 🙂

1. Preheat oven to 350. Butter a 9in square pan. Line with parchment paper, butter parchment. In a med bowl, toss apple and pecans with 2 T flour to coat. In a large bowl, whisk together remaining flour, baking powder, nutmeg, and salt. In a small bowl, combine applesauce and yogurt.

2. In another large bowl, using an electric mixer, beat butter, granulated sugar, and orange zest on high until light and fluffy, 3 min, scraping down bowl as needed. Beat in eggs, one at a time, until combined. With mixer on low, add flour mixture in three additions, alternating with two additions applesauce mixture, and beat to combine. Fold in apple mixture. Transfer batter to pan and smooth top.

3. Bake until golden and toothpick inserted in center comes out clean, about 50 minutes. Let cool in pan on a wire rack 20 min. Using parchment, lift cake from pan. Dust with confectioners’ sugar before serving. 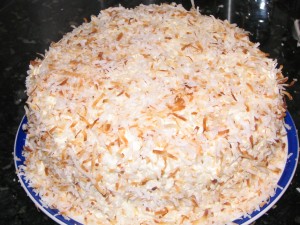 My coconut creme cake I made for Easter. It looks really pretty. I loved the cake and filling but I’m definitely making changes to the icing next time. The icing had THREE sticks of butter in it and only three Tablespoons of powdered sugar, and it definitely tasted buttery. I think next time I’ll do half the butter, make up the liquid difference with some whipping cream and add some more powdered sugar.

As far as looks go though, I was really happy with this cake.

I did Easter dinner for my in-town family this year and I made some of my favorite dishes, and some new dishes. Ham, sweet potato casserole, corn pudding, salad, rolls, and cake.

Next year I think I need a few more rolls and another side, just for more variety, but I was happy with this year’s success. Later I’ll post my sweet potato casserole, and corn pudding recipes, as these are my favorites and I’m definitely making them again next year!

On a blog with chocolate in it’s name, I do have to have a post about chocolate. 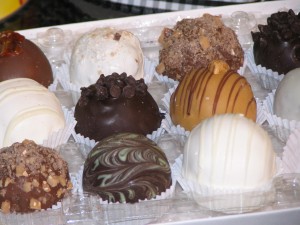 They’re made by a company called Sweet Jane Lynn. I think it’s two sisters who own it (and operate it).

These are delicious! My husband ordered them for Valentines day for me and they just arrived yesterday, so plan for it to take a while since they have to make every order by hand.

They’re totally worth the wait though!