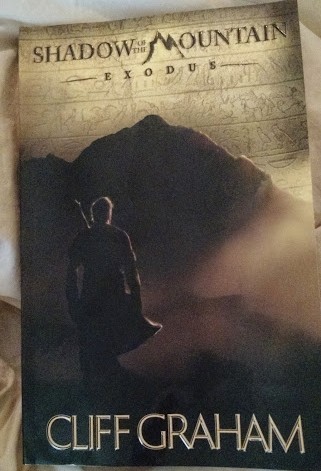 I’ve been wanting some new books to read and this review opportunity came up. From the description it looked like a book that I would like so I decided to give it a shot.

I’m so glad I did! I absolutely loved this book! Also, it says it’s the first in a series, so I’m looking forward to reading the others as they come out. I can’t wait to see who Cliff Graham is going to write about next.

Shadow of the Mountain is a Fictional backstory for Caleb in the Bible. Lots of excitement and adventure and a really great story about how he became who he was.

I can’t say a ton about the plot because I don’t want to give anything away. It’s easy to read, the story flows well, and I thoroughly enjoyed it. I don’t often stay up really late reading but I pulled a couple of late nights reading this book.

If you’re looking for something new to read, you should give this book a try! I’ll make it easy – You can go here to buy Shadow of the Mountain: Exodus

I received this item free for purposes of my review. All opinions are my own.

Hopefully everyone is familiar with the children’s book “If you Give a Pig a Party“. If not, you’ve probably heard of  “If you Give a Pig a Pancake“, it’s by the same author and has the same basic story. We acquired it in a Chick-fil-a kid’s meal one day and I can now quote the book (and probably draw you all the pictures) by memory. Basically, the premise is if you give a pig one thing, he wants something else, if you give him something else, he was something else again, and on and on.

There are just some things in life that I do that remind me so much of this book. And it’s frustrating and amusing all at the same time.

For example, my 5yr old had been asking for a pet for ages, and my husband kept talking about getting fish or a bird, so, one day at a yard sale I picked up a 10 gallon fish tank for $5. It had colored pebbles and lots of little rocks and accessories. My husband is all excited, we clean it, and he sets it up. About $100 later we have all the right filters, lights, etc. and my 5 yr old dutifully feeds the fish every morning.

We have 3 guppies, two males and one female. So…the female has babies, at least 30 babies. That’s a LOT of babies for a 10 gallon tank.

So, we get a 55 gallon tank and my husband and his brother build a cabinet (which still doesn’t have doors – so the baby gets into it all the time) for the fishtank. So, we fill up the fishtank and $200 later we have mostly the right lights, filters, bubbles, plants, and fish.

We let the tank sit for a few days then my husband starts moving fish from the small tank to the big one, the small fish tank was supposed to be put away before our Christmas party (which was a week and a half before Christmas). Well…both fish tanks are still up. The larger tank has an algae problem so he can’t move all the fish just in case they start dying. Which, we’ve lost a few fish, but we have over 10 guppies still so I’m really not at all worried about them. They’ll probably be having more babies soon… The moral of a story, don’t buy a fishtank!

Or, once my kids discovered their first barbies and polly pockets it just snowballed from there. They also discovered that said toys can be easily acquired at yard sales and Goodwill. Now, they have a room full of them! To be fair, they do play with them every day so it’s not a huge deal, but I am beginning to think that I should get rid of all the rest of their toys so they have more room for their dolls. Never buy that first barbie for a girl who loves pink, dresses, and lace unless you really want your house to be overrun by them!

Oh! and, my husband has recently discovered the fun of purchasing items on Craigslist. He purchased a copy of Rocksmith and decided he needed a guitar. He purchased 3 guitars on Craigslist (sold one of them so we’re down to two). How does Craigslist work at my house? I sell things and he buys things. I think we come out even in the end. Actually, hopefully, one of these days I’ll get around to trying out the game myself!

None of this stuff is bad, I’m glad the kids have their toys and my husband has his hobbies, just some days, I wish it all took up less space in my house!

I hosted a Pull-Ups House party over the weekend. If you haven’t checked out house party you should. Basically, you get a bunch of products (for the pull-ups party, I received 24 pull-ups plus a few other fun things) to try and share with friends. And it’s just what it sounds like, you host a party at your house, featuring the party item. I’m always looking for excuses to throw parties!

I have a bunch of extra codes for SnapFish 5X7 Soft Cover Photo Books. You get a free 20 pages, and the code expires 12/31/2013. You do have to pay shipping and handling which is about $1.99 but this is still pretty cheap for a photo book.

I’m posting one code below, if you try to use it and it’s already been claimed just comment and let me know and I’ll post another code for you.

I recently got accepted to host a new house party. (If you’ve never done one check out their site) You get free items (in this case lego duplos) for hosting a party and sharing or promoing this item to your friends.

We had to open one and try it out right away. I was amazed, my soon-to-be-4 yr old was able to look at the book and assemble the animals without any help from me. She was pretty pleased with her accomplishment.

Really, it’s like getting blocks and a board book instruction manual with them. This is such a great toy! The “instruction manual” is a fun book for the kids and it’s easy for them to follow the pictures and assemble the animals on their own. I can’t wait to try out more of these!

At Walgreens Photo you can order a free 8.5 x 11 Linen Hardcover Photo Book ($19.99 value for 20 pages) with the coupon code FAVORITEBOOK2 thru Thursday, February 17. You do need to pay shipping of $6.99 plus any applicable sales tax. Click on “Books” and then “Classic Photo Book” to get started.