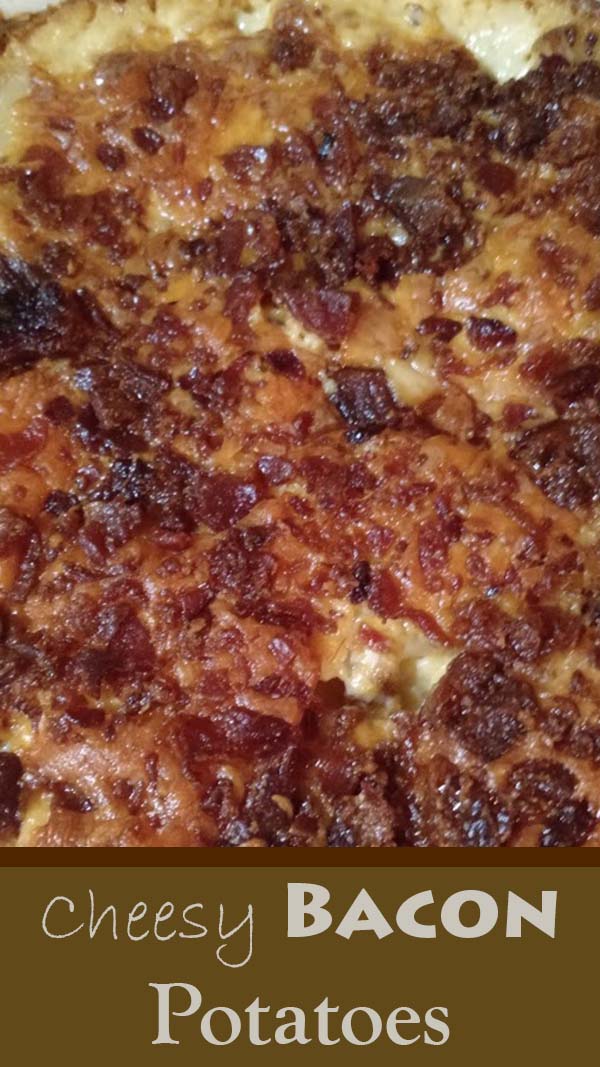 I love potatoes, bacon, and cheese! Side dishes just don’t get much better than this.

I don’t know about you, but I love bacon! I especially love it in the mornings with eggs and pancakes. But, just as much as I love bacon. I hate frying it. The grease splatters everywhere!

With 3 little kids my saturday morning ends up looking like this.

4yr old climbs in bed with us at 5, husband sends her back to bed at 6. At 6:30 she’s returned to my side of the bed and wants hot chocolate. My opening and closing door has awakend the 2yr old who’s always afraid he’s going to miss something.

I like to do a larger breakfast on Saturdays since we’re usually pretty busy once we get going.

I decide to make bacon, eggs, and pancakes. I start the bacon on a skillet on the stove. Which means that none of the kids can pull a chair up to the counter and “help” me because of the splattering grease. While monitoring the bacon, I mix up the pancakes, convince the children that I will indeed include chocolate chips in their pancakes, get some berry sauce started on the back burner of the stove (any berry will do, and the kids love it!), and then start actually cooking the pancakes.

About this time, I hear my husband hop in the shower, and my 6yr old appears and complains about how hungry and thirsty she is. The 2yr old wants to know if she can eat her pancake now and burns her finger when she tries to grab a hot one off the plate I’m setting them on. I check the bacon, calm her down, flip pancakes just before they burn, and then get her a plate with a pancake (cut up with syrup) and tell her to sit at the table with it, not the couch.

I start cracking eggs in a bowl to make scrambled eggs, little man who is insisting on hanging on my legs by now because he’s dying of starvation (2 hot chocolates are obviously not enough to tide such a tiny fella over for even 15 more minutes), complains because a bit of grease from the bacon splattered and got him. I hand him a cooled pancake to nibble on so I can actually cook and he takes it to the couch, eats half of it, and crumbles the rest.

Husband enters the room, showered and dressed and remarks that he wishes I would not let the kids eat on the couch. Because of course, both children are sitting on the couch eating instead of at the table. The 6yr old complains again about how hungry she is, but she doesn’t want to eat until the bacon is done.

The bacon is taking FOREVER! Pancakes are done, berry sauce is done, I start the eggs. Flip more bacon. A few minutes later, eggs are done and still the bacon is cooking. I dish up plates for everyone, everyone sits down to eat and I finally finish the bacon.

Husband picks through the bacon to find the crispiest pieces. I sit down at the table and the kids all ask for something to drink… And husband suggests that we should all hurry up and eat so we can go to some yard sales.

All that to say, I discovered that I can bake bacon. It’s way easier, and give me one less thing to manage in the mornings! 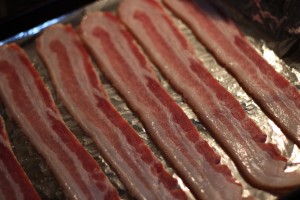 Oven at 375. Line a baking sheet with aluminum foil. Spread the bacon out in a single layer and bake until done to your desired crispiness. Usually about 30 minutes for me depending on how thick the bacon is.

If you want something more than plain bacon, top your bacon with 1tbsp cinnamon and 1/4 cup brown sugar (mix them together first), then bake until done. For a delicious glazed bacon.

You’re bacon’s all done at the same time, and there’s no grease splattering all over your kitchen!

Thanks to bzzagent.com I got to try Morning Star Farms veggie burgers for free. I tried the Grillers Original variety but they have several different flavors. I really wanted to try the Black Bean burgers but since they’re Spicy Black Bean burgers and I’m not a big fan of spicy I didn’t want to ruin my first veggie burger experience with a too-spicy burger.

I was really surprised, the Grillers Original tastes just like a regular hamburger. It’s a little thinner and a bit less filling than the burgers I usually make but put it on on bun with some mayo, tomato, lettuce, and cheese and you can’t even tell that you’re eating a veggie burger.

I think the texture is a little softer than a regular burger and these veggie burgers would be perfect for when my next baby is almost ready to eat meat. These burgers would be easy to chew and still provide a great source of protein for a toddler.

I also tried one of the burgers my favorite way, just cooked and cut up with a little bit of ketchup on the side. On a sandwich I didn’t notice the texture difference but just cut up and eaten plain I did notice that the veggie burgers is a little softer than a regular burger. It wasn’t bad, just a little different than what I was expecting. I may try it with mushroom gravy over mashed potatoes next time, that would be pretty tasty, and the potatoes and gravy would compensate for the texture difference!

I haven’t tried their veggie bacon yet but this recipe for a BLT and avocado looks delicious!

I love BLTs and I’ve never thought of putting an avocado on before.

Morning Star Farms has all sorts of great veggie recipes on their website!

I finally found what I was looking for! I made this soup then left for choir practice planning to eat when I returned. My husband, friend, our two little kids left me about half a bowl to eat!

Using a large pot, fry the bacon. Set it aside to cool. Drain off bacon grease, leaving the drippings in the pan.

Bring to a boil and boil until the potatoes are very tender.

Stir in velveeta until fully melted and mixed in.