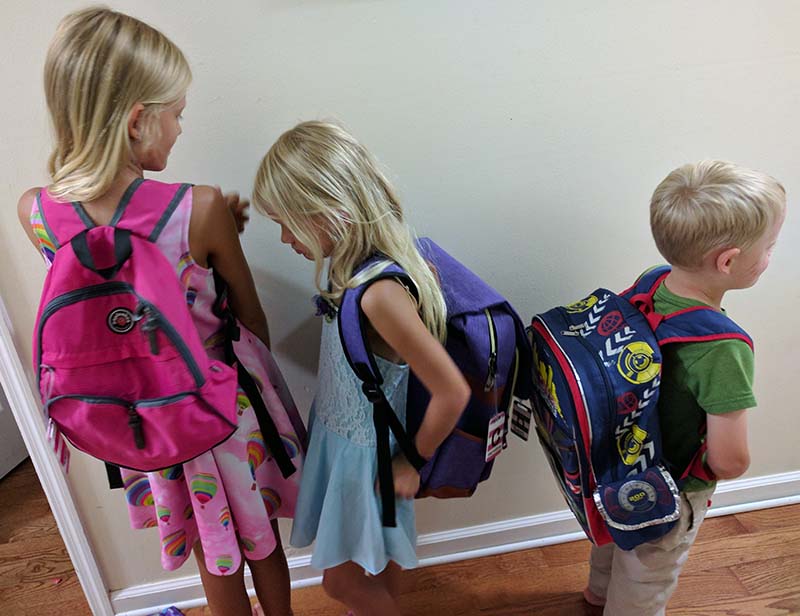 So, is it different having four? Is it harder with four? What’s it like having four? Are you done? The most common questions I’ve been asked since having my fourth child. All basically the same question. How has having four changed my life?

First off, yes, it is different having four, because, obviously, there is one more, so it’s different. Is the fourth child different, yes, because every child is different.

Is it harder with four? Yes, and, no. Four has a different set of challenges than 3, so currently, it’s harder than it was a year ago. However, it’s easier than it was 4 years ago when my third came along. There’s some significant family differences that make this the case.

My oldest three are 2.5 years apart each, meaning, when my third child was born, my oldest was just 5 and my middle was 2.5. So I had a brand new kindergartner, a toddler, and an infant. I was honestly a model parent until my third came along. Whether it’s because he’s a boy or just the combo of child, toddler, infant, is tough, I’m not sure. But with him, model parenting went out the window.

For example – my 4yr old waltzed through Target today in his socks (and I was lucky he had those on) because his feet were “too itchy” after football practice. Two children ago, those shoes would have been on the feet. Now, I’m like, it’s not wet out, it’s not cold out, and his feet won’t get dirty, so let’s just roll with the socks.

The distance between my kids is different. My youngest is 4 years younger than the sibling above him, so I have no toddlers. Now, I have 3 children and 1 infant. My oldest is 9 and loves to help with the baby. The 6yr old and 4yr old help as much as they can as well. I am dragging the infant along to every dance practice, every football game, and every activity (kid and adult). Luckily, he’s super laid back and actually loves all the activity. Doing all this with an infant is more challenging than without, but it’s also way less challenging than life was with a young child, toddler, and infant.

You have to realize, he’s the only child I have to buckle in the car. Everyone else does their own buckling. That’s about 20 minutes less time I spend getting in the car, compared to 4 years ago when my third child was born and I was buckling everyone myself.

All that to say. Adding the fourth was not harder than adding the third. My third child has been my hardest baby so far. But this is mostly due to other sibling’s ages and has little to do with the baby.

What’s it like having four? It’s awesome. We have so much fun. The baby is never bored – actually, except for this week of fall break. We stayed home one whole entire day and he didn’t know what to do with himself. He’ll literally sleep anywhere – except his crib in the middle of the day.

With sibling to entertain him, I still get to do important mommy things like shower alone, and eat lunch (most of the time). And with only him keeping me up at night (except for my husband when he snores), I am actually able to get a reasonable amount of sleep – and I can get a nap when needed. “If you disturb me, you’re taking a nap too” is a great way to ensure that children play quietly so I can nap. Because, no matter how tired a child is, they do not want a nap.

And with a 9 and 6 year old, I have someone to talk to during the day – you know, actual conversation. So my postpartum emotions haven’t been too bad this time. Not that mine were ever that bad, but this one is the best so far.

Are you done? Um, I’m sleep deprived, still physically recovering, experiencing postpartum emotions, the post pregnancy hair loss is starting (pretty sure this is my least favorite part about postpartum recovery), and I’m trying to figure out how to get my stomach back in shape for a wedding I’m attending in the spring. No, I’m never, ever, having another child. Honestly, give me about a year and then ask, because I might look like I have it all together right now, but I’m really just taking it one day at a time and hoping that most of them work out for us.