I don’t know about you, but I have a love/hate relationship with the new year. On the one hand, I love all the new beginnings, planning, resolutions, etc. And on the other hand, it’s January, it’s cold, and I don’t actually want to do anything.

One thing I do love about the new year is New Year’s Eve celebrations. 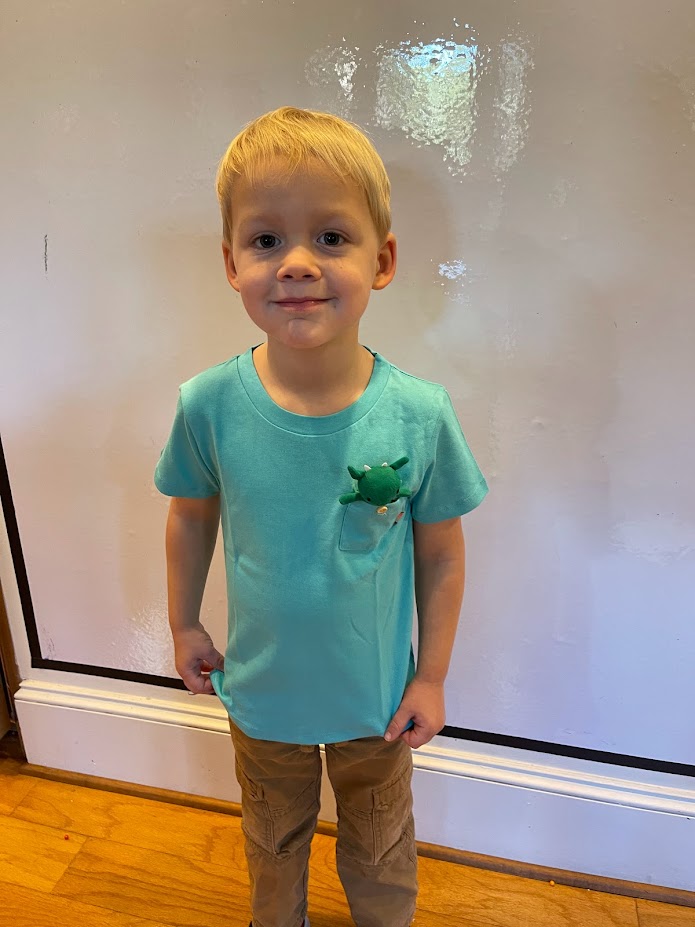 We went to a super fun New Year’s Even celebration with friends and got my little guy a new shirt (and a new stuffed friend) for the event.

Let me introduce you to “Pocket”, the little green dragon that fits in my little guy’s pocket. If you check out their website, his name is “Taco” but little man didn’t think that was a good name for a dragon and has landed on “Pocket”. I think Pocket is adorable and he’s so cute with his little Pocket Dragon.

Pockimals makes super comfy clothing with a pocket with a button hole. Each little animal has a button on it, and it buttons into the pocket. Making it easier to keep up with your little one’s bring along toy.

Pocket fits well in his hand and in his pocket and had lots of fun with us at our New Year’s Eve party. 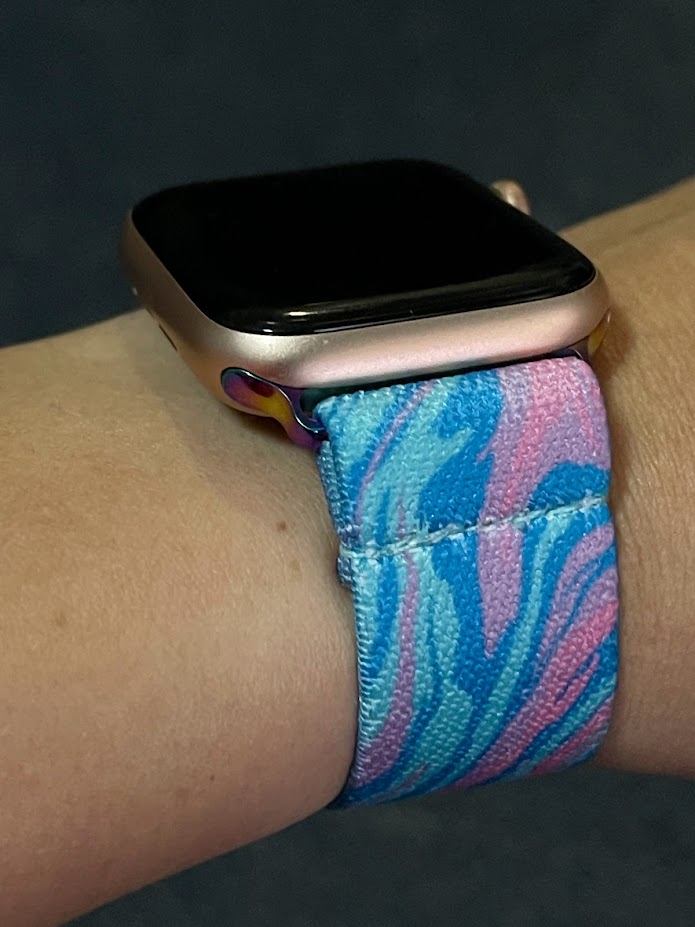 One of my goals for this year is to exercise more. I’ve made some good effort at it this year, but with work being busier and with it being a desk job, I’m just not getting in the physical activity that I really want.

I’ve joined a January exercise / nutrition group and was super excited to try out this Braxley Band on my Apple Watch. Because it’s important to look good while I’m exercising, all the way down to my watch!

This band is super comfortable and secure and so much fun! I love having a cool new watch band to go along with my January goals! 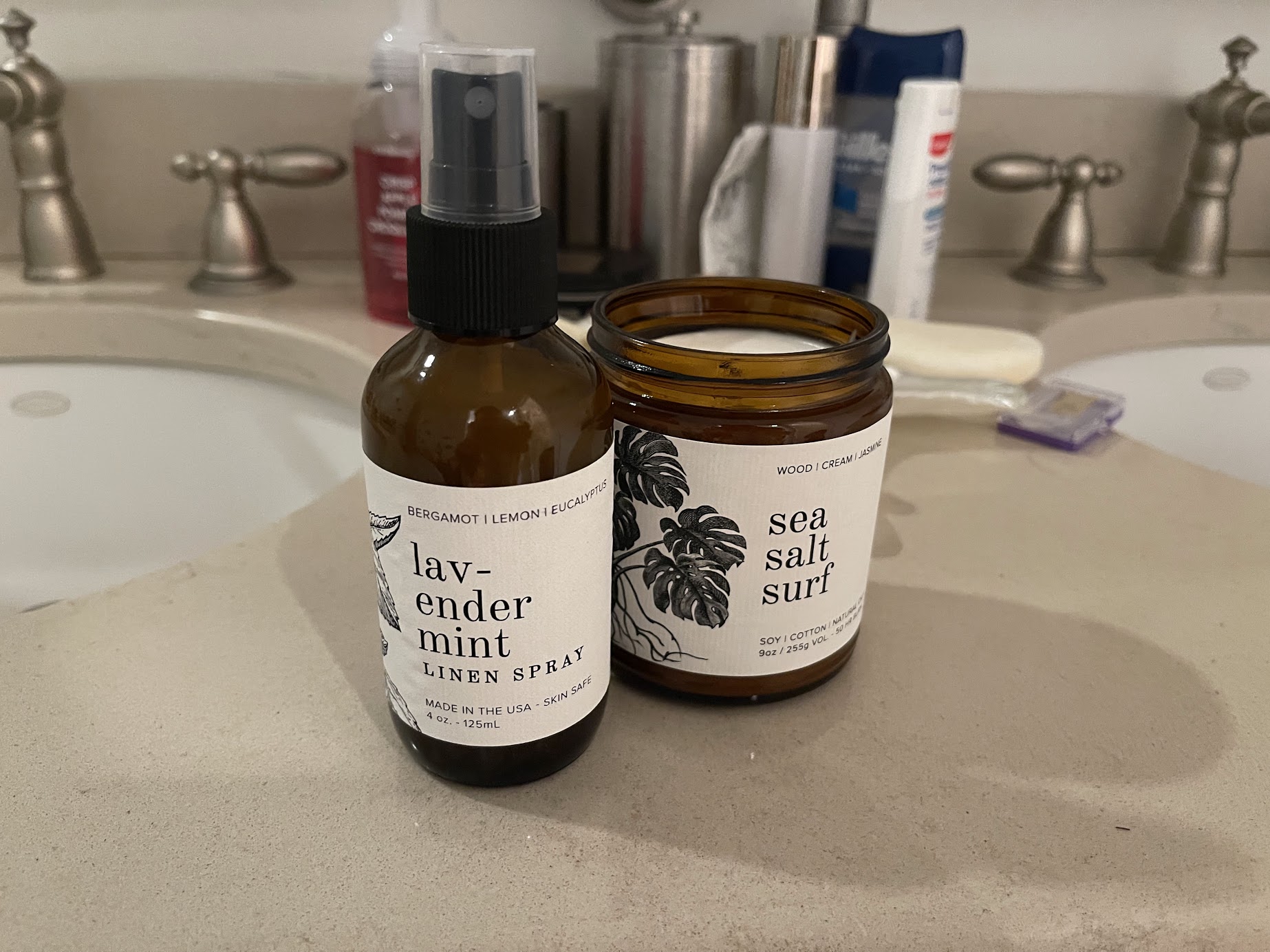 I love a good candle! And what better way to start off the new year than with one of these amazing candles from Broken Top Brands.

They started as a candle company and have branched out into home and bath products.

I absolutely love the scents of the two items that they sent me. They’re very natural and smooth smelling and I love using them.

I feel like I can use them to add scent to a space (like a room or linen) and it’s not overpowering. It’s subtle, which I really like!

All of their products are  gluten-free, paraben-free, phthalate-free, and vegan. And the scents are all very neutral so that anyone can use them. For example, I can use the linen spray on things for me and for my husband and neither one of us feels like the scent is too masculine or too feminine, it’s like this perfect middle.

I love new things! New toys, new clothing, new furniture, new towels, new movies, new books, new phones, and well, you get the idea. New Years are also fun because they’re a great time to reevaluate your plans, where you’re at in life, and what you want to achieve in the next year.

I try to avoid random New Year’s resolutions, you know, things that maybe I’d like to do (like make it to the gym at least once a week) but don’t really have a good plan for accomplishing and focus more on making plans to accomplish what I want to do. Like, how can I make it to the gym once a week, with a toddler who naps, homeschooling a 1st grader, preschool, dance classes, music lessons, and a few other things like grocery shopping thrown in there, who has time to go to the gym.

Honestly, my motivation for going to the gym is so I can put the kids in childcare and enjoy 1 1/2 hours to myself without answering a thousand questions, pretending like the sky is purple, saying the correct words for “Elsa’s” coronation, toting the toddler around, and trying to clean or cook all at the same time – oh and, keeping the 6yr old focused on school work too. An hour and a half a week to myself to just exercise and take a shower undisturbed really would be nice – but factor in that it takes all that time and more to get everyone out the door, drive there, and then return, it makes for an all day affair for me just to go to the gym! I really am going to try to go more often, I just haven’t figured out how to work it into my school and activity schedule yet. I’ll figure it out eventually…

Anyways, back to new things. Which reminds me, New toys – the next person who gives my child a new toy is going to die! I’m kidding…kind of. After Christmas we now own FOUR child’s cash registers. Four! And a whole new bucket of play kitchen food – I think that makes 3 buckets total in my house! Today, I was working every single child’s puzzle we own so I can throw away all the puzzles that don’t have all their pieces, because, we received NINE new puzzles for Christmas. Nine! and I don’t have room for nine new puzzles, so the old ones must go! On the bright side, I also organized all the uno and skipbo cards back into their appropriate places so next time I want to play uno they’ll all be together – not sure when that’s happening. And I tossed a whole bunch of random cards and card games that I just hate. Now to just hide candyland and monopoly…

So…new things, new goals, for this new year, I have a few. One for each area because I need to keep things simple.

18 month old: He will learn to ask for water this year – currently he just goes around the house crying when he’s thirsty, some form of pointing or word for water would be greatly appreciated by all. I handed him a cup of water this afternoon and he just sat there and chugged the entire thing like he was dying of thirst. And then he was no longer cranky.

3yr old: She will learn to read – I’m thinking just the preschool hooked on phonics. She’s dying to read like her older sister so I’m going to order it for her and we’ll work on it every day. Maybe 3 letter words by the end of the year. She would be so happy!

6yr old: She will learn to write legibly – why is handwriting the most difficult subject ever? I have no idea! Reading and math are a breeze so I guess something had to be difficult. I can barely read it even when I know what she’s writing, so you know it’s bad!

Me: I will go to the gym once a week – just kidding, I know that’s not going to happen. Though, it would be nice! I do need to get a new exercise routine going though before we start trying for child number 4 later in the year. Pregnancy is way better when I’m active.

Parenting: With 3 there’s a tendency to let them get away with things that they shouldn’t because I’m busy and tired, just being more intentional and focused even if I don’t feel like it.

Marriage: I want to spend more time doing fun things with my husband. We’re actually making good progress on this already and we have a few things planned for next year so I just need to keep the ball rolling and we’ll be good here.

And that’s all the new stuff for this year. Plus the usual, you know, doubling my facebook and twitter followers, updating my blog regularly, cooking more meals from scratch, and figuring out how to make a milk gravy and biscuits that are actually edible!

The new year is arriving and it’s that time of year when people like to make resolutions for the coming year. I’m really not a resolution person myself, I just think it’s stupid to make a resolution for the sake of making a resolution, which resolution you manage to keep for less than the first month of the new year. Really, if you’re going to decide to do something, commit to it, and do it, regardless of the time of year.

That said, I find that January is a great time to evaluate progress and make some goals. Resolutions, not necessarily, but goals, definitely. I look at it this way, I can resolve to kiss my husband every time he walks in the front door and when I break that resolution I’m done- with 3 kids I’m probably breaking that resolution sometime in the first week since I can’t just stand there at the door and wait for him to come through it. But with a goal I allow myself more space to create areas of growth.

Spending more time with my husband this year is a good goal since I’m struggling to find the balance of marriage and kids since the arrival of my third. Goals are less easily laid aside because my goal is to spend more time with my husband or to better understand my husband this year. Or, put another way, I want to see our marriage strengthened. Now, within that goal, I/we can set up ways to accomplish this. Maybe that means both of us agreeing to kiss first thing when he gets home from work, or maybe that just doesn’t accomplish anything for either of us and we need to focus on something else.

But, just announcing a resolution without any real plans to back it up just seems like a waste of my time. So, my goal for New Year’s Eve, spend some time, while we’re waiting for the new year to arrive, planning and discussing our goals for this coming year. (no worries, I’ve had this evening planned for months, I’m fairly certain we can accomplish this, and if not we’ll do it some time soon…)